Servicing Australian Farmers for over 50 Years

The plough is the specific attachment for turning over and fragmenting the soil for the subsequent processing or directly for sowing. In turning the soil, weeds and previous crops are buried, speeding their decomposition.

This is a sturdy unit which is ideal for turning the first sod in preparation for working new ground – available in standard and reversible. The standard is a conventional plough that turns the soil to the right whilst the reversible has two boards, one that turns to the right and one to the left with a simple switch – over handle.

The standard (single-plough) consists of a ploughshare whose function is to cut into soil. Its helical mouldboard design generates the groove by sliding the ground sideways. Positioned perpendicular to the ground, a knife is mounted in front of the ploughshare-mouldboard group, allowing it to cut into the soil itself.

The reversible (180 degree swivel plough) consists of two mouldboards positioned one above the other and opposite by 180° on the same rudder. The two mouldboards work alternately: when one is working the other is raised relative to the ground surface. The swivel plough allows the turning of the soil to the right or to the left relative to the inching movement. To change the direction of turning, at the end of the field make a 180° rotation of the plough.

To use the plough it is advisable to set up the two-wheel tractor with 6.5/80-12 wheels and relative weights (34 kg each). 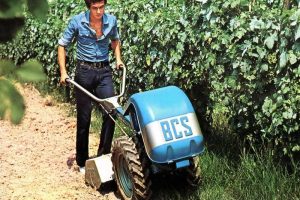 Servicing Australian Farmers for over 50 Years